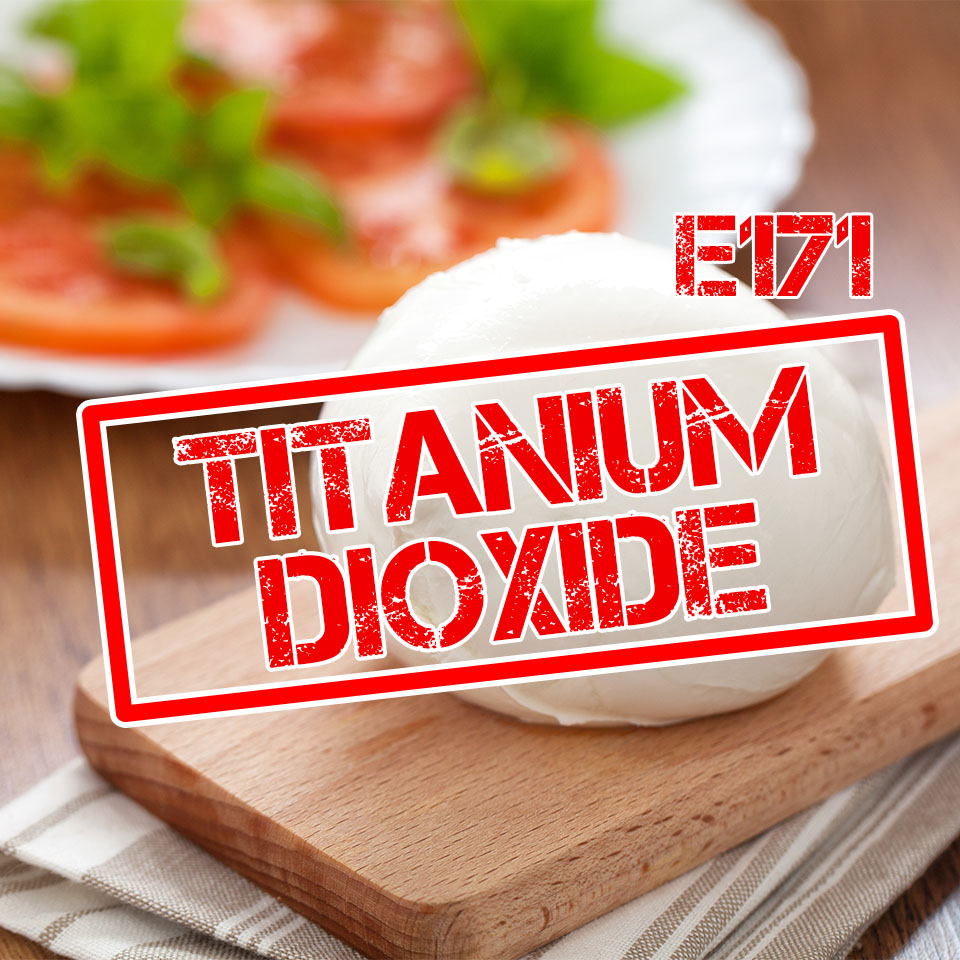 Titanium dioxide particles in our diet – effects on the tolerability of titanium implants?

A study by the University of Sydney on the effects of titanium oxide particles (TiO2) in the gut, published in May 2019, rekindled the international debate in the institutes and media about the use of titanium dioxide in our foods, marked by E171. (1-3)

Titanium dioxide: E171 and Cl77891 – where we encounter the nanoparticles

The whitening agent titanium dioxide has meanwhile become indispensable in our everyday lives, with consumption having increased sharply in the last century. The additive E171 is found in medicines, plastics, chewing gum, paints, clothing and also in our food, such as mozzarella, instant soups and sweets. Under the name Cl 77891 the substance is contained in cosmetic products such as toothpaste or as nanoparticles in sun creams. Especially spray applications in which the titanium dioxide enters the lungs, the risk for a carcinogenic effect is highest. For this reason, the Federal Institute for Risk Assessment advised against using sun creams in spray form as early as 2010. (4)

Official reactions to the use of titanium dioxide

Worldwide, the chemical titan dioxide is produced on a million-ton scale, in Europe alone it is more than 1 million tons per year. The EU Commission wants to classify titanium dioxide as a hazardous substance with the warning “possibly carcinogenic”. In animal studies, nanoparticles were able to penetrate deep into the lungs and cause chronic inflammation. In rats, lung tumors formed after inhalation of TiO2. (5)

The French government has already responded by prohibiting the use of titanium dioxide in food for at least one year from 2020. A French team of researchers published a study in 2017 in which rats were given titanium dioxide as drinking water for 100 days. As a result, effects on the immune cells of the Peyer’s plaques, the place in the intestine at which immune responses are initiated, were shown by reduction of the immune defense cells and changes in the intestinal mucosa. In addition, it promoted inflammation and also a possible tumor-promoting effect has been reported. (6) Three other studies in recent years have proven that nanoparticles increase intestinal permeability, have a genotoxic effect and can be implicated in conditions such as cancer, diabetes and cardiovascular disease. (7-9)

Nevertheless, the Federal Institute for Risk Assessment in Germany does not recognize any reliable scientific arguments that would justify the use of titanium dioxide as a food additive. (10) The results, however, give reasons to think about.

Titanium dioxide also damages the microbiome of our gut

In the latest study of the University of Sydney published in the Frontiers Journal, a bacterial biofilm was formed in the gut of mice after the administration of titanium dioxide. This is a potential trigger of inflammatory bowel disease and colon cancer.

Furthermore, not only a reduction of the surface of the intestine, but also an increased inflammatory readiness showed. (1)

The University of Zurich, headed by Prof. Gerhard Rogler, is researching the effects of nanoparticles on the intestinal mucosa. Initial results show that especially patients with inflammatory bowel disease, such as ulcerative colitis and Crohn’s disease resulting in a disturbed barrier of the intestinal mucosa by titanium oxide particles have significantly increased TiO2 blood levels and a higher risk for acute inflammation of the gut. (11) There is a suspicion that diseases such as dementia, asthma, eczema and autism can also be triggered by the absorption of titanium dioxide particles.

What effects do titanium implants have on our organism?

The question now is how the increasing oral intake of E171 and increasing  environmental exposure affects the ability of our immune system to excite inflammation on titanium oxide particles that are clearly found in the surrounding soft tissue and bone of titanium implants. It has been shown in numerous studies that the titanium oxide layer can be disturbed and changes under physiological conditions. In animal experiments, titanium loads of parenchymatous organs after hip or dental implants have been shown. The highest accumulation was found in the regional lymph nodes, in the lungs and in the spleen, less in the liver and kidneys. (12) 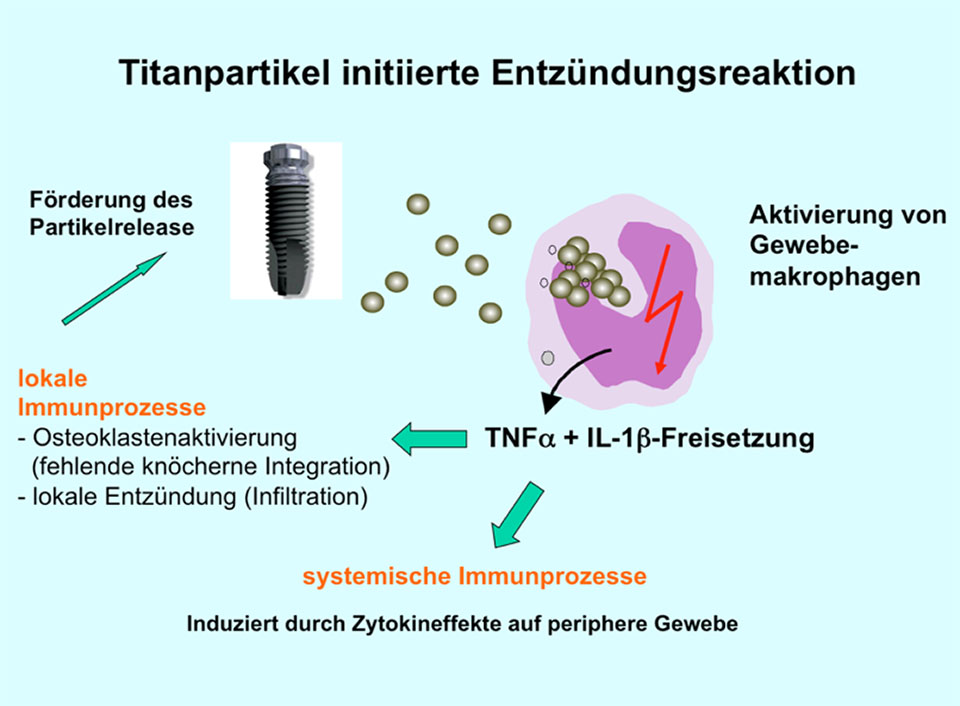 Overloading and physiological micro-movements of the implant, which lead to a continuous shearing of the oxide layer into the tissue (fretting corrosion), cause titanium dioxide particles to enter the surrounding tissue. Also by the negatively charged electrons in the saliva and the positively charged metal ions of the titanium surface upon exposure into the oral cavity, a corrosion process can be initiated by ion exchange. (13) We must assume that titanium implants are not completely biocompatible in the human body and can therefore trigger these diseases. This knowledge is not new, as early as 1997, after injection of suspensions of titanium powder, rats developed malignant connective tissue tumors and lymphosarcoma. (13) 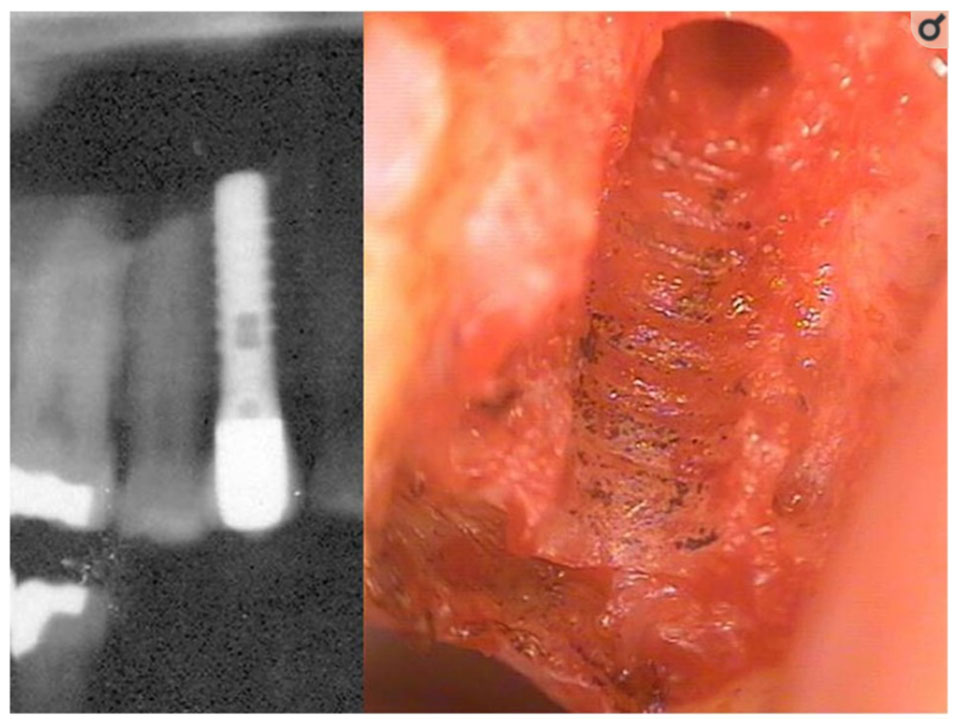 Are there allergies to the material titanium?

Allergies to titanium are virtually non-existent, which is why conventional medicine assesses the material as the material with the best biocompatibility. However, this is a very one-sided approach. Although there is rarely an allergic reaction to a titanium-containing material and then, more typically, to alloying constituents or impurities, such as e.g. aluminum, nickel or vanadium. However, reactions to titanium oxides are very likely, especially under a certain genetic disposition and not allergic, but of inflammatory nature.

A titanium stimulation test can prove the genetic disposition by detecting specific inflammatory messengers. (14). Titanium particles activate tissue macrophages, resulting in an increased release of TNF-alpha and IL-1-ß. TNF-alpha plays a key role in numerous infectious and inflammatory diseases. Osteoclasts are activated and can promote peri-implantitis, i.e. bone loss around the implant. (15)

In the surrounding bone, the RANTES / CCL5 values are increased by a factor of 30. The resulting chronic, silent inflammation can contribute to diseases such as rheumatoid arthritis, multiple sclerosis and other systemic-inflammatory diseases. (16)

Titanium oxide from the perspective of toxicology

From a toxicological point of view, subtoxic exposure to titanium and its compounds can be medically diagnosed only on the basis of long-term effects. Subtoxic means that a substantial toxic load on the organism is usually well below a toxicologically relevant limit. The organism does not recognize the substance as a toxin because when only small doses are supplied, the immune system initiates no defense reaction, which is why the substance can be stored for a long time virtually unhindered until the depot may reach toxic relevant doses.

The mechanism of action of titanium oxide is probably similar to that of other metals. These include the inhibition of enzyme activity and thus of the metabolism, increased formation of free radicals, opening of the blood-brain barrier and corresponding psycho-neuro-immunological effects. (17) From the toxicology it is known that titanium dioxide leads to inflammatory and fibrotic changes from an individually different, critical dose and metal ions (nickel, titanium, cadmium and probably also mercury) have a carcinogenic activity. (13) Inflammatory mediators can be laboratory-verified, chronic-toxicological reactions, however, often only with hindsight on the basis of the disease, such as in the autoimmune diseases rheumatoid arthritis, multiple sclerosis or Parkinson’s disease.

How can we protect ourselves and our patients against it?

All of these findings show that not only should we look more closely at what food we are purchasing and focus on natural and organic food, but that we should also use biologically compatible materials in dentistry, such as zirconium dioxide, in order not to burden the health of our patients additionally.

The question remains open as to how the increasing consumption of TiO2, which we can hardly manage to avoid today, affects the tolerability of titanium implants. This can only be demonstrated by scientifically based long-term studies and the consistent critical consideration of the use of metallic materials in dentistry, especially in chronically and severely ill patients.

The safest way is the consistent renouncement of these materials with simultaneous immunological and biological stabilization of our patients, as in the SWISS BIOHEALTH CLINIC in Kreuzlingen with over 35 years of experience in biological medicine and in the field of ceramic implants.

5. Summary of Classification and Labelling of Titanium dioxide. https://echa.europa.eu/de/information-on-chemicals/cl-inventory-database/-/discli/details/100661. [Online]